So cheat day has come and gone, it was a very interesting experience. Interesting on many levels. Firstly, it was time to hop on the scales for the first time since i started the diet a few days ago, remember i began at 73KG. On the morning of cheat day, prior to eating anything – i weighed in at 71.2KG. 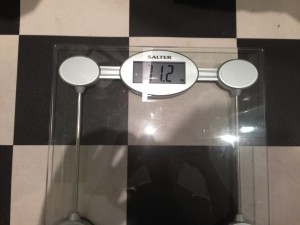 I was a little surprised at how much the weight had gone down, however it is important to bear in mind that this mostly is likely to be water weight. So i went ahead to begin my cheat day. The one thing i have missed all week has been my breakfast – porridge oats, milk and fruit. I began with this as normal. I was amazed by how immediate the effect was after finishing my ‘normal’ breakfast. I instantly felt very bloated, and my stomach started making lots of gurgling and rumbling noises! It was only at this point i realised that this hadn’t happened all week while on the diet, whereas usually it was a usual occurence before and i assumed it was normal. The bloated feeling continued throughout the day. 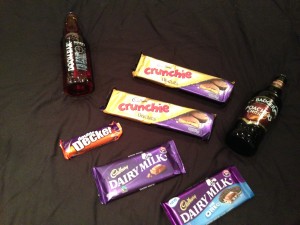 As i have a serious sweet tooth, most of my cheat day foods were chocolate based. I went for the Dairy Milk Oreo Bar mid-morning with a tall glass of milk, Packet of Crunchie Biscuits and Double Decker Bar before lunch, a Pulled Pork Bap with Potato Wedges, Coleslaw and Lemonade and Lime for lunch, Chinese Takeaway for dinner with 2 bottles of Cider, followed by the other Dairy Milk bar and packet of Crunchie Biscuits washed down with 2 bottles of ale – for a grand calories total (drumroll please)……. ballpark figure of 6-7000 calories! Elvis has just left the building.

So the question is – how did i feel? Tired and full would be the best way to describe it! I almost hit the wall with the last packet of biscuits, but i soldiered on like the fearless warrior i am (ha, yeah right!). It was the first day of the week where i felt like i could use a nap. Unsuprisingly! I did enjoy being able to eat whatever i wanted and as much of it as i wanted without feeling bad, and it has certainly sorted out my cravings for my porridge oats! I have some interesting data i am collecting with regards to my sleep, which i will share in a separate post in the next couple of days.

This morning i was curious to see how much of a difference there was in my weight, Tim mentions in his book it’s normal to see MASSIVE weight fluctuations near cheat day, so i was wondering what i was going to be weighing in at. He didn’t disappoint, this morning i weighed in at 74KG! 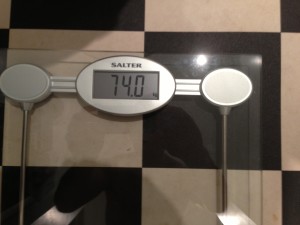 A full 2.8KG heavier than 24hrs before. Now, once again, he attributes this largely to water-weight and that your bodyweight returns within 48hrs of being back on Slow Carb. So far through this experiment my results have been by the book to the tee, so i have no reason to suspect otherwise for this. I’ll keep you updated!

I’m learning more about quantities of food, and planning ahead far more, unfortunately i had to throw away a steak and the lamb i bought as it didn’t last long enough, Tim did mention in his book to keep it as simple as possible, i originally wanted to start making recipes right away with no practice and i think i was getting a little ahead of myself, so from now on i’m going to focus on Chicken and Steak, but separate them out into portions and freeze the rest until i need them. I’m going to get a few supplies in tomorrow. Cheat day next weekend is Sunday, i’m interested to see if i get any cravings this week and what i will line up for then to come anywhere near to yesterday.

Today has been back to normal, and it was nice to not feel bloated like yesterday. My girlfriend also joined in on the breakfast and she commented on how she felt energetic after the Eggs and Spinach. We also ate out at a restaurant, which was much easier to order Slow Carb at. I had King Prawns to start, and Chicken and Ham with Spinach and Tomato main. There definitely are easier places to eat out than others when it comes to Slow Carb, you just need to pick out the right places. So that was a pleasing result and not anti-social! I’ll get back to you with more on my sleep……..