What a difference a shoe makes

Just a quick post today, i just had a quick run after work around the block for 30mins. I’ve gotten used to running in my Vibram Five Finger shoes and i know there’s a lot of different opinions on these shoes but i have to tell you that after running today in different shoes, i really can tell a huge difference. Today i was wearing a different pair of shoes, they are still considered minimalist and aren’t built up around the heel, but they do have a lot more cushioning than the Vibram’s do and from that short run my knees, hips and back really hurt and i feel that it’s from your body being aware that there is more cushion underneath and therefore can hit the ground with greater force. Even though i was thinking this and trying to rectify it, it was still happening. All i know is that when i run in my Vibram’s i get zero hip and back pain, and my knee pain is massively reduced now too. 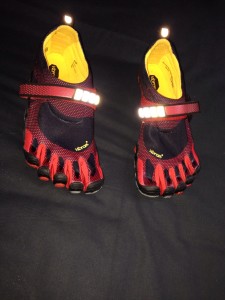 So i know some people think i’m crazy running in these, but bear in mind that i initially started wearing them for a few hours and then took them off and once i built up to wearing them every day over the course of a few weeks, i was wearing them for a year before going for runs in them. So even more than before, i truly believe your shoes make all the difference!