I was very worried about my knees going into the run as i’d only done a couple of very short treadmill runs since my last long run attempt almost a month ago. The focus was on flexibility and strengthening going into the marathon as i know from previous experience that if i overdo it on runs my knees can’t take the volume. One thing i’ve learned is it isn’t always about volume, it’s about training intelligently.

My weekend began on Friday evening where as a safety precaution i had my feet and knees taped up with some Tiger Tape. This essentially acts as an extra ligament and supports you wherever it’s placed and i decided i would get taped up everywhere that hurt last time when i went in on my knee, so i had both knees done on the outsides and the arches of my feet. This was made all the more interesting as we found out my legs are too hairy to get the tape to stick, so i had to have parts of my legs shaved! If i’d had known this beforehand i could have made this into an extra fundraiser! 😉 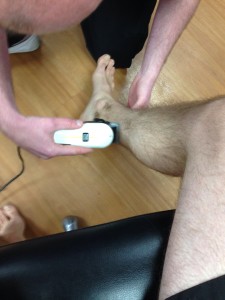 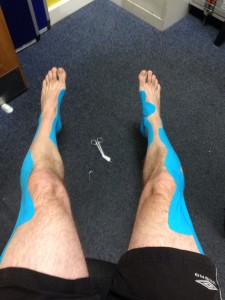 So once armed with my battle armour we headed off to London to register and take a look at the expo, i was very impressed with how the event was run and thought i may have been queuing for a long time, however i was registered and in within 15 minutes. The evening was spent in a relaxed fashion and i was a good boy and got to bed at a reasonable time.

So i had everything planned out for my morning of the run, breakfast pre-measured and ready to eat, clothes laid out, gps watch and GoPro charged up, forms filled in, number pinned to vest, basically everything i could think of so i didn’t have to do much on the morning other than get up, eat and get ready. I counted my jelly babies carefully so that i had enough for one at each mile and at the beginning and end, got everything into my kit bag and set out to the tube station.
As i arrived to the start i became aware of there being no one else in Vibram’s anywhere (i did speak to one other lady at the end who was wearing them) but i’ve always had a way of being different in whatever i do! You get sectioned off into zones so it’s not just one huge free for all and i got chatting to a lovely gent called Jim who was on his 20th and last marathon. His pieces of advice were very helpful in terms of where to position at the beginning, what to expect and his number 1 rule of not being a casualty. 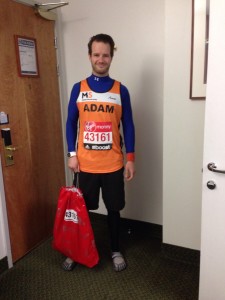 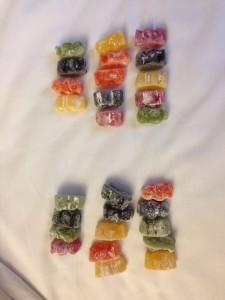 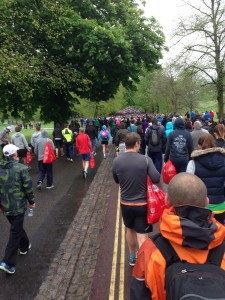 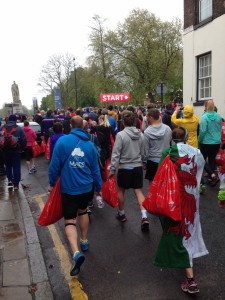 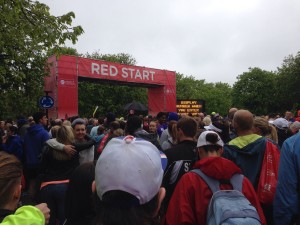 The weather was on our side, it was cloudy and quite cold so it was perfect for us but not ideal for people watching (sorry about that!). I had a base-layer top on that kept me warm. We started off very quickly and for the first few miles you have to be very careful of items of clothing that people throw off to the side as it could be very easy to slip on something and twist a knee or roll your ankle. Within 30 seconds of going i was coming up behind a girl with a broken leg in a boot and attempting it on crutches. This put things into perspective and made me think that i really don’t have anything to complain about. Hopefully she made it round eventually but it would have been horrendous. The mood was lightened further ahead though as we passed a row of hedges where a lot of men had obviously been caught short and decided to ‘relieve’ themselves. One lady behind me was quite shocked: ‘i’ve never seen so many men weeing before!!’

I decided that i was going to go in and just enjoy the experience and not worry about a time. I took my GoPro and filmed at various stages (video coming soon) and any kids that held their hands out i made sure i high fived them as i went past. I just tried to soak it all in. The first few miles went by without a hitch and the knees felt fine so my confidence was growing. I had my fiance and friends at Shadwell, which gave them a viewpoint of mile 13 and 22, i almost missed them on the way but caught them just as i was going past. 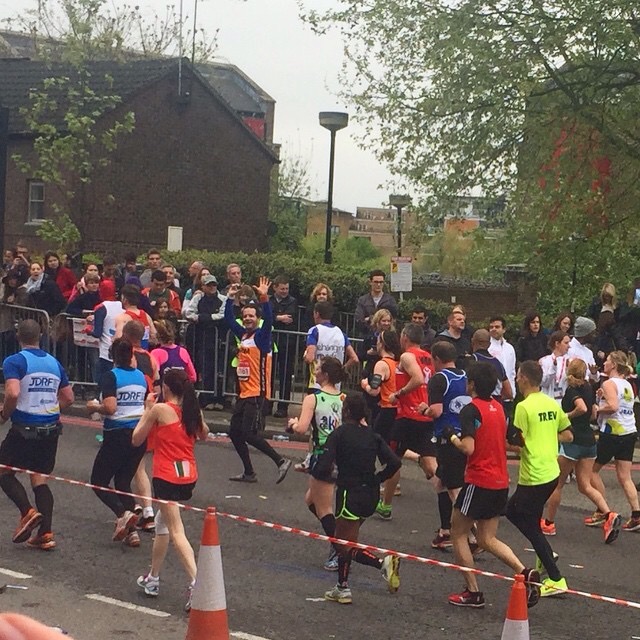 These points really made a huge difference to my run and the best tip i had received well before the run was to get my name printed on my vest so then people would cheer my name all the way round and it literally was all the way round. The streets were jam packed full of people cheering, handing out sweets, handing out Vaseline (there were several people bleeding), playing music, bands playing and just generally creating an incredible atmosphere. It is a bit of a cliche but it does really make the day what it is.

As i was heading past the half way point there were a couple of people being stretchered off, one girl who was completely unconscious having her head held up. At a guess it looked like dehydration and this was something i paid attention to as i went round. I didn’t take any water for the first half as i had been needing the loo prior to the run and i didn’t want to have to stop so i waited until 15 miles or so then started to have mouthfuls at every other station. I went through all the showers which i enjoyed and helped to keep me cool. The run really began to kick in at around 17 miles, because at this point i was thinking to myself that i felt great having run 17 miles but the realization sets in that you still have 9 to go. My legs were really started to hurt, feet were sore, knees felt swollen and lower back was sore but i kept focussed on seeing everyone at 22 miles. Having my camera also helped a great deal as i realized it took my attention away from the pain so i filmed a lot. Going past 22 was a great feeling, it was lovely to see everyone and it spurred me on to finish the last 4 miles.

Every step at this point was unknown for me as i hadn’t completed this distance before. I just kept bringing my feet up as high as i could every so often to keep the knees bending and didn’t allow myself to stop (as i knew i’d lock up if i did). 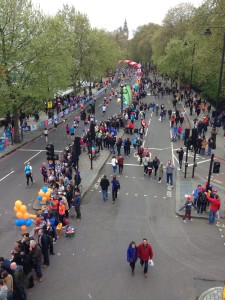 Some of the worst parts were actually the last few metres, as they count you down from 800 and it seems to take forever. Once you see the finish line it’s an amazing feeling and i made sure i had some left in the tank to be able to (almost) sprint to the finish. I finished in 4hrs51mins and Jim had told me earlier the instant you cross the finish line you’ll know if you’re going to do it again. My first thought was ‘holy crap i’m glad that’s over!’ I think it’s safe to say it was a tick box scenario for me and i was just very pleased to get out the other end without any serious injuries. 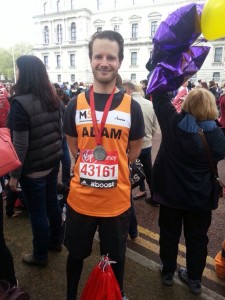 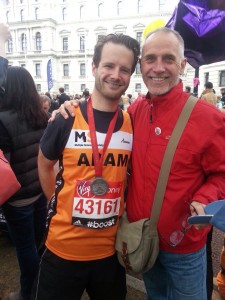