Each year we try to raise as much money and gain as much publicity for Charity as we can, in at least 1 major event. Whether it be with a very tough physical challenge (see 24hr Treadmill Challenge), or something just plain stupid (see Goldeneye Bungee Jump) – we strive to push our limits, both physical and mental, to help these fine organisations. See below for some of the things we have done so far:

2015 London Marathon – in aid of the MS Society 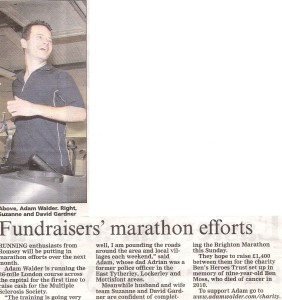 In 2015 i challenged myself to run the London Marathon in aid of the MS Society.

The 24hr Treadmill Challenge was the brainchild of Fitness Manager  – Rob Chappell, in order to raise money for the Army Benevolent Fund and Royal Artillery Charities. The premise was simple and daunting – 2 teams of 4 participants take 1hr long shifts in turn to keep Treadmills in perpetual motion for 24hrs. So this meant 6 hrs of running – day and night. The stopping and starting only served to make the challenge harder and running at 4am was a killer. The challenge was extremely tough and took weeks to recover from, with Rob taking the helm of both teams (!) and running the equivalent of 2 marathons in length (!). Everyone did an amazing job, although we don’t think anyone was quite the same again…

The bungee jump was by far our craziest idea for raising money. We wanted to try and top the SkyDive from the previous year, so our thoughts immediately turned to a Bungee Jump. But no ordinary bungee jump off a crane in a field somewhere, we thought let’s look for the biggest one, and we found it – lurking in Switzerland. The Verzasca Dam is 722ft in height (comparable to jumping off Canary Wharf!) and was the dam used in the opening sequence of the James Bond movie Goldeneye. A few words from Adam to sum it up: “The jump was terrifying and it was hard to be able to grasp just how enormous the Dam was. They say at somepoint everyone has an outer body experience – this was it for me”. The charity was chosen as local children’s charity – Naomi House. Naomi House and jacksplace are hospices for children and young adults that provide support to children and young people with conditions that mean they are unlikely to live to become adults. The team of 4 of us managed to collectively raise over £1800.

SkyDive – in aid of Concern Universal

Where it all began! We were invited to take part in a SkyDive to raise money for Concern Universal – a charity tackling poverty from the grassroots. The dive took place in Old Sarum, Salisbury, at Sky Dive South Coast. Quite a strange feeling of how you feel more at ease the further into the sky you go, and the feeling of the freefall is just amazing. A fantastic experience for a fantastic charity.